Working Equitation first started as a competitive sport in 1996. The first European Championships took place the same year, in Italy. WE is now a recognized sport in two continents, Europe and South America, in the following countries – France, Spain, Italy, Portugal and Brazil, with a considerable amount of competitors and spectators in each country. WE has its own governing body in each Country.

Working Equitation, is a 3 phase sport, set over 2 days –

Overall, the competition is a combination of horsemanship, submission and control of the horse.

There are Three levels of WE – Novice, Intermediate and Advanced.

In the dressage test, marks will be given for the accuracy and execution of each movement.

Collective marks are awarded at the end of the test. The obstacles are marked individually, with collective marks at the end. A combination of these marks, with the time in the speed section, declare the winner.

The phases of Working Equitation are :-

The First Phase – The Dressage Test

The dressage phase, is a freestyle test, in a 40m x 20m arena. There are set movements, that each rider must ride, in a set order, within a timescale.

The obstacle course is designed to show the horsemanship and connection between horse and rider.

The course is ridden in walk and canter to show the ability of the rider of how they can control their horse’s paces. The Novice dressage test includes movements similar to Novice and Elementary level dressage. The Novice obstacle course has simple obstacles which have to be ridden with caution and precision in ‘style’. The Intermediate level dressage and obstacles, require a higher level of horse and rider technique. The Intermediate test requires movements to those similar to an

The speed round is the same as the style round, over obstacles, but against the clock.

Championship competition – The cattle round

The fourth phase, only in a Working Equitation championship, is the cattle test. The challenge is to select one cow from a herd and then drive it into another pen. Each team member has to select a different cow and drive it, with the help of the other team members.

The obstacles in WE are approached in canter, but ridden over or through, in walk. 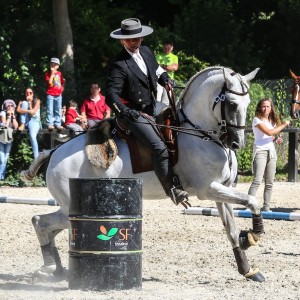 This obstacle has two barrels, that the rider has to canter or rein-back around. The rider enters inbetween the two barrels, canters around the first barrel, then the second one, with a flying change in the middle of the barrels, to change direction, in preparation for the next barrel.

The gate is often a piece of rope between two wooden poles, but can also be a metal or wooden gate. The rider has to ride up to the gate, with the horse parallel to the gate, before opening it. The rider cannot let go of the gate, whilst going through it, the gate must be closed or hooked back onto the post, to finish the obstacle. The gate should be opened and closed without any hesitation, with confidence and accuracy. 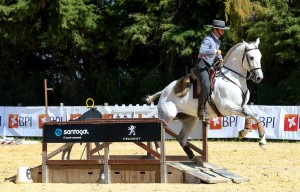 The bridge is wooden with barriers on each side. The horse should be confident and relaxed, walking over the bridge without hesitation.

For this obstacle, the horse has to pass sideways, over a pole that is slightly raised of the ground. The horses fore or hind legs cannot touch the pole. Some riders choose to canter over this obstacle. In higher levels, the pole maybe in an ‘L’ shape. 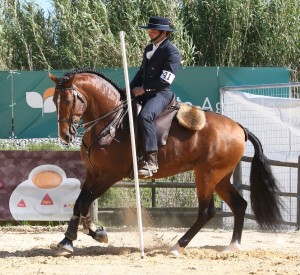 This obstacle usually has seven poles. The poles are placed on two lines, with four poles on one line and three on the other. The line of three poles are each placed half way between the line of the four poles, creating a zig-zag slalom. The rider enters the slalom in canter, starting with the longest side of four poles, by doing a half circle around the first pole, then crossing over to the other line, with a flying change, half circle around that pole (the first one on the line of three), then crossing over again, flying change, and so on through the obstacle.

The jump obstacle, is usually a bale of straw with a pole placed on top. The rider must jump the obstacle accuratley and calmly.

The livestock pen is a small enclosure, with some small livestock inside, such as hens, ducks, turkeys or maybe empty. The pen has a small fence surrounding it, creating a circular corridor around the livestock. The rider has to ride into the corridor, in canter or walk, ride around the pen and leave, all in a relaxed rhythm. Often, this obstacle has to be ridden twice, once in each direction. 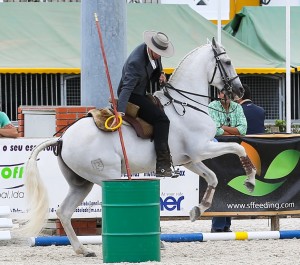 Replacing the pole in the barrel

The rider has to carry the ‘vara’, that they have picked up from the barrel, previously, over certain obstacles, such as the hoop obstacle or the jump. To put the ‘vara’ back in the barrel, the rider must aim and lower the ‘vara’, into the barrel, without dropping it or knocking the barrel. If the rider, knocks or drops, they can dismount to pick up the ‘vara’ or the barrel, mount again and finish the obstacle.

Cup on a pole

For this obstacle a plastic cup, is placed on the top of a post, at the end of a corridor with posts at either side. The rider has to canter into the obstacle, halt, pick up the cup, rein-back slalom through the poles, and place the cup on the last post.

Jug on a table

This obstacle requires the rider to pick up a jug, from a table, and hold it, up above their head, whilst their horse stands perfectly still. The jug has to be placed back on the table, without the table being touched.

Pole in a barrel

This obstacle requires the rider to pick up a pole called a ‘vara’, from a barrel, using their free hand.

Riders can circle around barrel once, in preparation of picking up the ‘vara’

The hoop is often placed on the top of a wooden bull, the rider has to aim for the hoop, with a long wooden pole called a ‘vara’, that they have picked up previously from the barrel.

Looking for a Lusitano Horse for Working Equitation – We usually have a good selection of quality horses for sale.

All the super photography on this page is by SUSANNE WIEDERKEHR 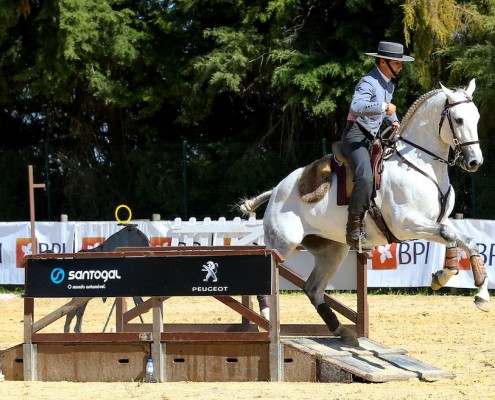 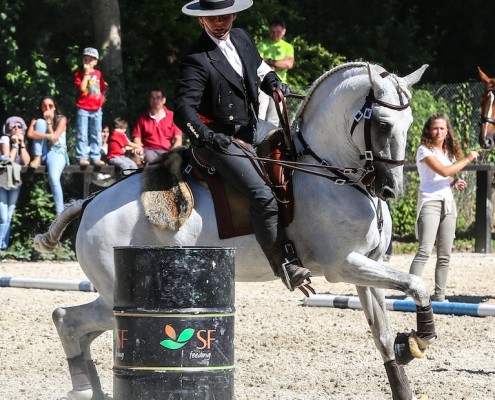 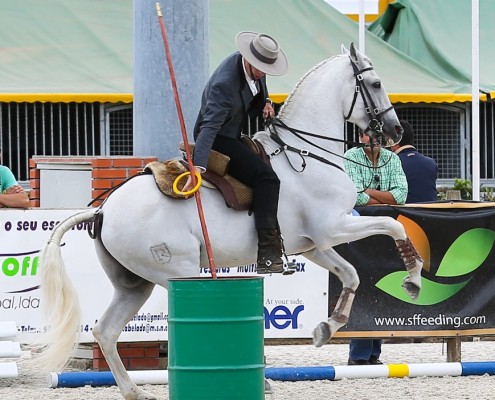 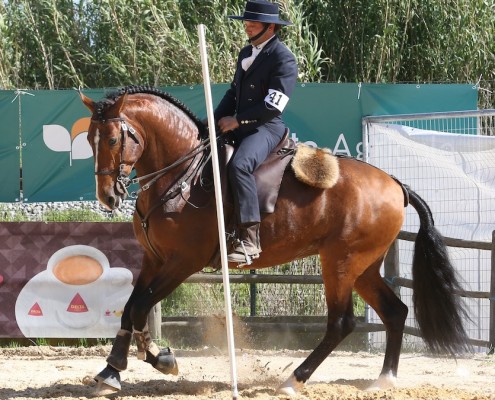 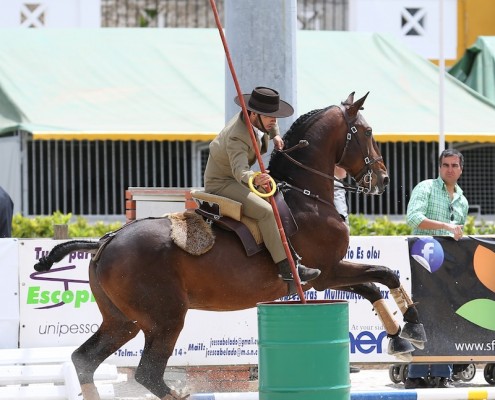 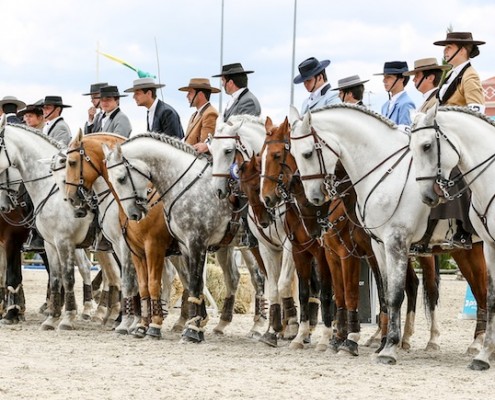 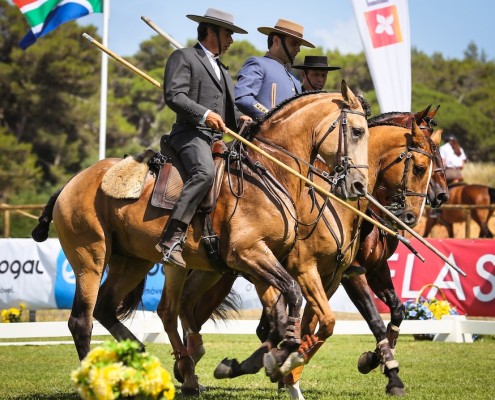 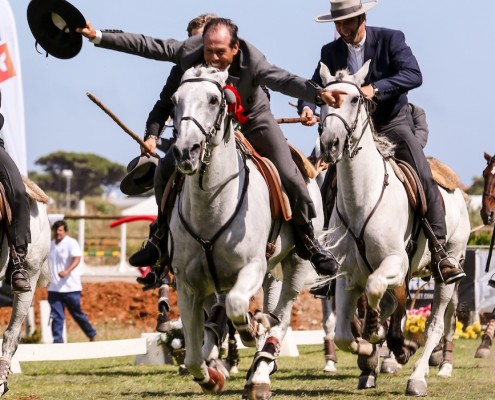 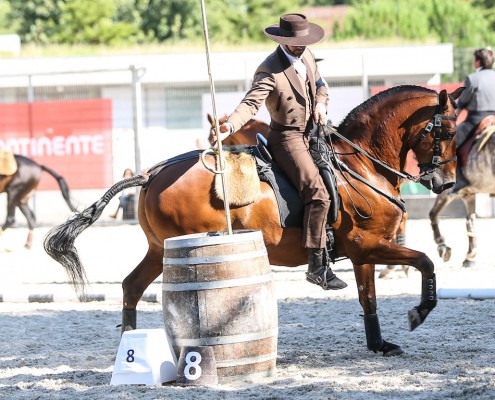