Take a Journey Back in Time

History of the Lusitano Breed

It is fitting that such a fascinating horse as the Lusitano should have an equally fascinating history. Its heritage goes from far before the current ”AD” era through the great Roman crusades and medieval wars. It has been carrying heroes and kings. History has shaped the Lusitano as we know it today – a horse with a brave and intelligent mind, a willing spirit and a unique ability to collect and perform high school dressage including the dramatic airs above the ground.

Let us tell you the story…

The Oldest Saddle Horse in the World? 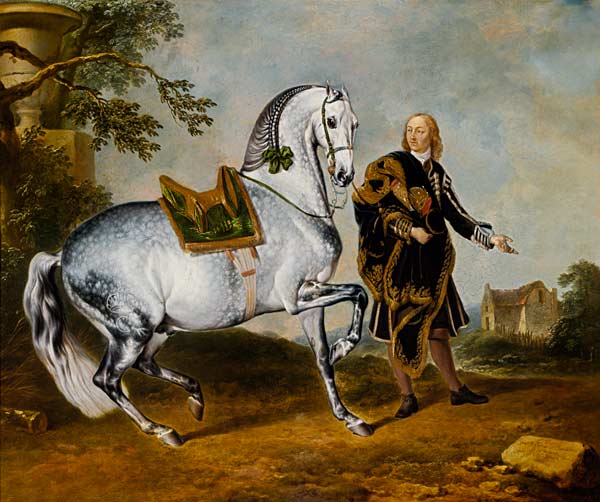 The breed association APSL claims the Lusitano to be the oldest saddle horse in the world, ridden for over 5000 years. To understand if this is true we have to look back in time even further. The oldest evidence of horses living on the Iberian Peninsula, that today consist of Portugal and Spain, is a skull found in Atapuerca dated to be around 780,000 years old. From this era and forward there are many more findings of bones, engravings and paintings in different archeological sites around the peninsula. From around 20,000 BC those portraits and various tool findings begin to depict activities related to a horse culture.

Genetic Studies on the Lusitano

To understand the modern Lusitano’s relationship with its ancestors’ mitochondrial DNA, modern studies tell us some interesting things. They show not only that the modern Lusitano shares genes with the horses that inhabited the Iberian Peninsula during the late Stone and Bronze Ages, the studies also tell us that half of the haplotypes (genes on one chromosome in a chromosome pair) existing in the Lusitano breed are rare variants. The breed also has nine haplotypes that are completely unique for the Lusitano and horses from the Peninsula.

There is a widespread hypothesis that the Sorraia breed is also an ancestor of the Iberian horses. This is not certain, however, even if do they share some DNA. The Lusitano and the Sorraia share one maternal lineage, but this particular lineage is dated to the Middle Ages which makes it quite recent. Gene clusters are often traced using evolutionary history, as populations from a common ancestor tend to possess the same varieties of gene clusters. The gene clusters of the Sorraia and Iberian breeds are largely separated but the Sorraia has faced what is called a genetic bottleneck, meaning that the breed has undergone a sharp reduction in size, and that has reduced its gene pool variation. Because of this bottleneck it remains uncertain whether the Sorraia is an ancient of the Iberian horse.

APSL – History of the Lusitano Horse

The land that our favourite breed inhabits, the Iberian peninsula, is named after the Iberian tribes from North Africa that invaded the peninsula around 3000 BC. The North African tribes were followed by Phoenicians and Celts who brought with them oriental breeds from Syria, Libya and Egypt. This is believed to have led to a two way exchange of horses, thereby contributing outside blood to the ancestry of the Iberian horse. The first expeditions of Greeks reached the area in 800 BC and were met by an alliance formed between the Celts and Iberians known as the Celtiberians. It is under the Celtiberians that the Iberian horse was renowned as a war horse.

Ancient Writers About the Lusitano

Xenophon, often referred to as the forefather of classical dressage, praises the Iberian horse and its riders in one of his books written around 400 BC. He says; “On horses such as these even gods and heroes will appear and men who know how to work well with them will look magnificent.” He further admiringly describes the Iberian horses ability to collect and the mounted war techniques of their riders after witnessing their role in Sparta’s victory against Athens in the Peloponnesian war.

Homer writes in the Iliad, chap. 16, referring to the Iberian horses; “Fast as the wind and sons of Podargo, the harpy that was impregnated by the wind Zephyr while grazing at the borders of the River Oceanus”. Maybe he was inspired by, or himself inspired, the legend that tells us the mares on the Iberian Peninsula were sired by the wind. In ancient days the Lusitano were known as the Sons of the Wind, and as Arsenio Raposo Cordeiro says in his book, named Sons of the Wind, it’s also possible that the myth of the Centaur is inspired by the perfect bond between the Iberian horse and its rider as they were as one on the battlefield.

As the Roman Empire expanded its territory, Iberian land was conquered. The superior Iberian horses and the equestrian style of warfare impressed the Romans with the fast starts, stops, quick retreats and renewed attacks, to the point that they adopted it and set up cavalry stud farms of their own in the area.The Romans also brought the Camargue horse to the Peninsula. The ancient Camargue horse had an interesting characteristic: the foals were born dark, black or bay, and turned white with age, one of the most common colours of the Lusitano today. The Iberian horses were at this time well represented in the popular chariot races of the Greek-Roman world. With the chariot races entering the Olympics as a sport in 680 BC the Lusitano has a long history as an excellent carriage horse, it is not surprising that they made world champions in four-in-hand driving at both the 1996 and 2006 Olympics.

In year 711 an Arabian invasion of the Iberian peninsula began. There is a modern conception that this brought an infusion of Arabian blood to the Iberian horses, but this is not strictly true. Even if the invasion was politically Arabian, the invaders were ethnically Moors, and the army was mostly made up of Berbers from Algeria and Morocco. The Moorish domination in the region lasted from 711 to 1492 AD and testimonies tell us that the invaders, just as the Iberians, were a horse loving people. The horses they brought with them were mainly oriental and barb horses, and at this point it is most fair to say that a reintroduction of oriental blood took place in the now quite heavy Iberian horse. If the Iberian horse was greatly admired before the “Arabic” invasion, the refinement of the breed that took place at this time made it even more superior and desirable. With a strong loyalty to its master, a stunning beauty, great agility and strength yet an obedient and docile nature, the Iberian horse possessed a perfect combination of characteristics for every man, army, knight and king.

The Lusitano at Royal Stables and the First Riding Academies

During the Arabic-Moorish occupation, the breeding of the Iberian horses continued to flourish and many horses were exported. During the Middle Ages the Iberian horses were spread throughout Europe and represented in almost every royal stable. They were the first choice not only for European kings but also for famous crusaders and warriors such as William the Conqueror who had two black stallions at the Battle of Hastings in 1066 and Richard the Lionheart during his crusades. The art of training these strong and agile horses for war also became the hobby of royalties and nobility, and the art of dressage was born; to dance with a horse became a passion in itself. Grand riding academies were formed around Europe and most of them proclaimed the Iberian horse as the best of all. In 1667 the Duke of Newcastle wrote of the Iberian horse;

“it is the noblest horse in the world, the most beautiful that can be. He is of great spirit and of great courage and docile; hath the proudest trot and the best action in his trot, the loftiest gallop, and is the lovingest and gentlest horse, and fittest of all for a king in his day of triumph.”

The Iberian Horse Improved Other Breeds 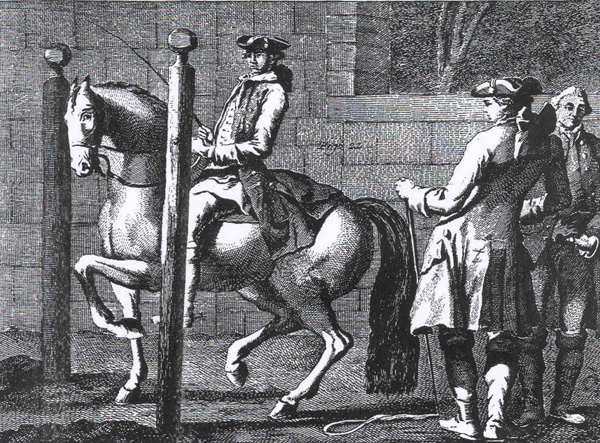 breeds can at least partly be traced back to Iberian blood. DNA testing shows that they are the ancestors of, amongst others, Thoroughbred, Welsh, Friesian, Connemara, Knabstrupper and Lippizaner.

The demand for Iberian horses around the world, their use in war and their exportation to Portugal and Spain’s new territories almost drained the Peninsula of purebreds available for breeding. Fortunately some breeders were determined to preserve the classical bloodlines’ purity, and thanks to them we have the Lusitano as we know it today.

Portugal and Spain Separating their Studbooks

As late as 1967 the Portuguese and Spanish shared the same studbook. At that time the Spanish and Portuguese horses were known as Andalusians or Iberian horses. When the studbook was split, the Portuguese branch of the Iberian horse gained the name Lusitano after Lusitana, the ancient Roman name for the region known today as Portugal. 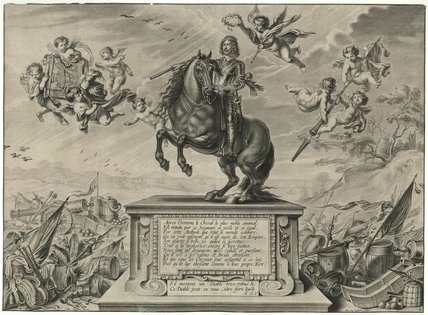 related, today they differ in many ways. This can be partly ascribed to selective breeding that has created different types. After mounted bull fighting was forbidden by King Philip V of Spain at the beginning of the 18th century, the breeding in Spain became focused on sport horses with elevated, exuberant movements. Differences can also be partly ascribed to the fact that Arabian blood was widely used in Spanish breeding programs during the late 19th century. In Portugal, however, mounted bullfighting is still an important tradition. Both today and historically, breeding selection is largely focused on producing a versatile cattle and “fighting” horse that possesses a combination of muscular force with progressive movements, allowing explosive sprints, agility and abrupt stops. Preserving these Portuguese traditions and values has allowed the Lusitano to be brought into our time in its original form, with its history clear for all to see; with a brave mind and a willing spirit; with a strong hindquarter and a confirmation allowing quickness, easiness to collection and an excellent canter. The Lusitano a horse for a King.