An Iberian Revolution by Helen Triggs

Featured in Horse and Hound Magazine  published 1st May 2015

IBERIAN horses were once a guilty pleasure. People loved them for their fairytale appearance (think unicorn minus the horn), their exuberance and legendary loving temperament. But they were not thought to be competitive because of their shape and movement — circus ponies rather than real prospects. However, since a Spanish team with three purebred Pura Raza Española (PRE) stallions strutted their way to a dressage silver medal for the Spanish team at the 2003 European Championships, relegating Britain to bronze position, there has been a buzz about Spanish and Portuguese horses within UK dressage.

At London 2012, Portuguese pair Gonçalo Carvalho and Rubi, a Lusitano originally from the Portuguese School of Equestrian Art, demonstrated a textbook piaffe which earned them 13th place in the grand prix special. And some of the loudest cheers in London were heard for Juan Manual Muñoz Díaz and his flamboyant PRE dancing partner Fuego, who finished 12th in the kür. More of these hot-blooded horses are being chosen as grand prix partners by non-Iberian riders, initially because of their talent for the collected dressage movements, but also the realisation that the best can produce good extended gaits. Italian Silvia Rizzo and French rider Alizée Froment both ride Lusitanos at international grand prix level. This trend is not just at the top level — Iberian horses are increasingly being found in the British stables of dressage riders at grassroots level, as well as those looking for an all-rounder.

Registrations of purebreds with the British Association of Purebred Spanish Horses (BAPSH) show a fourfold increase over the past 10 years. In 2014 there were 2,350 purebred horses registered with the society and imports of around 100 per year, mainly adult horses for dressage and breeding. “In the first three months of this year there were 36 imports registered and four new UK stud farms have been created — a sign the growth is continuing,” says Mary McBride, registrar for BAPSH and a breeder.

ONE of the reasons that Iberian horses’ appeal has been limited in the past has been their size — typically around 15.1- 15.2hh. But breeders in the past 10-15 years have realised there is a bigger market for larger horses and it has become much easier to find Iberian horses over 16hh. They have also recognised that horses with a smoother knee and hock action and longer neck are more suited for dressage and are breeding for those traits. People now talk about the “modern Iberian sport horse” — a lighter, more elegant mover than the traditional Baroque type. These horses have often been the choice of older riders, who appreciate their soft backs and who would struggle to sit a big-moving warmblood. They can ride a horse that is comfortable, but still athletic, sensitive and capable of being trained to a high level. “They are great for riders who want to continue their level of equitation and keep riding at an older age,” says Sherene Rahmatallah of Sussex Lusitanos. However, younger riders can also get a lot from a partnership with an Iberian. Eighteen-year-old Becky Edwards was focused on showing when she took on Margaret Cox’s Lusitano, Ufano II. They were reserves for the junior British dressage team last year and this year are on the BD young rider prime squad. They have competed for Britain abroad on four different occasions. Becky has made up for Ufi’s lack of extravagant paces by riding very accurate, harmonious tests.
“It’s been a bit of a whirlwind,” says Becky. “I never expected to do so well with him. Internationally we’ve had a really good response to him.” Jacky Stolper is one of Britain’s most competitive dressage riders and for years she had hankered after a Lusitano. She found her first, Vinagre, in the pages of H&H and has just been to Portugal and bought a new five-year-old. “I got Vinagre as a novice four years ago and he is ready to go inter II and grand prix,” she says. “You definitely have to encourage Lusos to work in a slower rhythm than the warmblood, but they learn very fast.”

“My new horse has better paces, but I wanted to stay with the typical Lusitano type. In Portugal I saw some very big horses that move more like warmbloods.” Another grand prix rider, Karen Shepherd, has recently purchased her dream horse — a black PRE six-year-old stallion, Pepperwood Ostentoso IX. She was inspired by watching Gonçalo and Rubi at London 2012. “I’ve always wanted one but never found one that would be competitive against the warmbloods. I saw the video of ‘Toto’ and booked a plane ticket to Barcelona. I showed the video to my trainer, Carl Hester, and Rafael Soto and they both told me to go and see him,” says Karen. “When I rode him he was very hot but very kind. I’ve never sat on anything with so much potential.” Karen also plans to use the stallion on her warmblood mares.

IBERIANS are making their way up the leader board at dressage competitions. Alice Hurley, who is trained by four-time dressage Olympian Richard Davison, was ninth in the advanced medium open at the 2015 British Dressage Winter Championships on Karen Bourdon’s PRE stallion Deseado CCV. Emma Brooks’ Zimbral is the first Lusitano to be accepted onto the World Class Equine Pathway. The pair are trained by Charlotte Dujardin and hope to do their first inter II at Somerford Premier League in May. Rebecca Brennand and her PRE stallion Barquero JF are winning at prix st georges (PSG) and have international small tour in their sights.

But the Iberian horse can turn a hoof to most disciplines. The Lusitano stallion Novilheiro was trained to grand prix dressage, competed in eventing with Rachel Bayliss and was Britain’s top prize-money earner when showjumping with John Whitaker in 1983. His grand-daughter, The Tourmaline Rose, won three Hickstead eventing grands prix with Pippa Funnell. Mhairi Goodwin’s 20-year-old PRE Novarro 4 has jumped up to 1.30m and will start eventing at BE90 this year (as well as also competing in affiliated dressage and taking up side-saddle and tent pegging). “When I first rode him I didn’t know he was a PRE, or that they aren’t known for jumping,” says Mhairi. “He just flies round — he’s very agile.”

Driving Iberians is very popular in Spain and Portugal, but there are few teams in the UK. Karen Scott-Barrett has used PREs for driving trials and won top three places in the pairs section of the National Driving Championships. She praises their temperament: “They are immensely kind and forgiving horses who try their hearts for you. They are good at everything, but we nearly always win the dressage phase.” Endurance and TREC are also disciplines where the temperament and hardiness of the Iberian fit well. Gillian Hasberry successfully competes her PRE mare Callista at both. “She possibly doesn’t have the out-and-out speed, but she’s very sound in body and mind,” says Gillian. “She’s well-balanced because she’s so good at flatwork.”

WILL we ever see an Iberian horse on the British dressage team? It’s not impossible. Richard Davison is open-minded when asked if he would compete one. “I don’t care about the breed, just the strengths and weakness of the individual horse. So yes, if it was good enough for international grand prix,” says Richard. “Funnily enough, someone contacted me about one the other day.” Watch this space.  H&H

For Iberians only  UK

A new international competition, MCI GB (Masters du Cheval Ibérique) is being launched this year, which is open to Iberian horses and MCI members only, and will feature tests from young horse and preliminary levels up to grand prix. Purebred winners can qualify for the European Masters Championships, although part-breds can also compete in the classes. This is an opportunity for Iberians to be judged against their peers and in the UK, by British dressage judges. The tests are similar to British Dressage tests, but riders can chose to ride in Spanish or Portuguese traditional dress or English dressage attire.

Visit: www.iberiandressagemasters.co.uk
There are also new qualifying classes for the Copa de AN CCE (National Breeders’ Association) at the PRE breed show (24-26 July) which will mean direct qualification for International

Purebred Spanish Horse Trade Fair (SICAB ). Held in Seville in December, this is the PRE world’s equivalent of the world championships — a week of celebration of the PRE horses, with classes in dressage, showjumping, doma vaquera (working riding), driving and alta escuela (high school dressage). 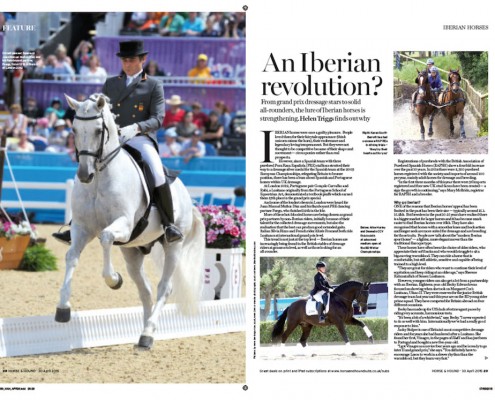 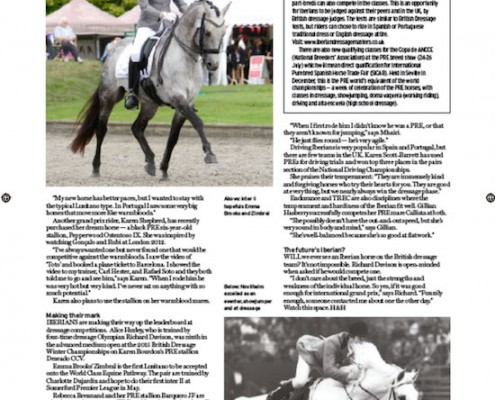