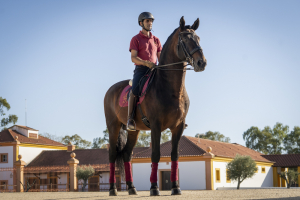 Duarte has been working in the Alter Organisation for 35 years beginning his career at their other farm Companhia de Lezirias. His daily life is backing and training young horses and the riders working in his team. Although he loves dressage and to compete he does not come across as hugely competitive. 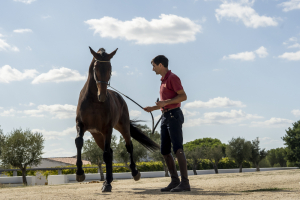 He told me he never imagined he would become an International Dressage Rider and be one of the ones to qualify Portugal for the Japan.

Being an incredibility modest man he is very committed to his daily routine. I had the impression he was slightly in awe at the possibility of actually going to Japan next year. 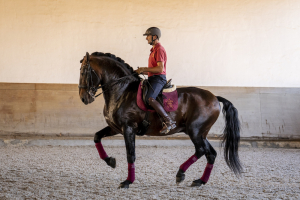 a huge extremely grand stallion that has such a noble presence when I stood beside him in the grooming area I was struck by his ´zen´energy. What a great shoulder and neck he has. There is a strong sense of the history of the ancient breed about him a war horse, the gentle giant. He appears that nothing would ever faze him, in fact Duarte confirmed this by telling me he what a brave and willing horse he is never says no to anything.  He said he feels Beirao understands everything like he has lived many lives. They do make a lovely team. 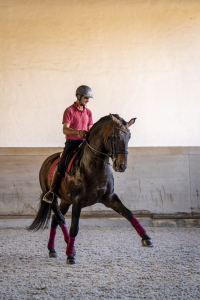 Most of Beirão daily care is done by Duarte from grooming, washing and training. Duarte was the one to originally to back him for riding. For such a big horse he is very elastic and light when he is moving.

Beirão has an impressive family behind him, like Coroado AR he is the son of Rubi AR the highest scoring Lusitano ever in the Olympics. In fact the Alter Stud has an outstanding track record with their horses. With a majority of the Lusitanos arriving at the Olympics having AR bloodlines – 3 out of the 4 horse that qualified for Japan share AR bloodlines. Rubi AR owned by Christine Jacoberger is the highest scoring Lusitano and Guizo AR owned by Yeguada la Lira y la W won team silver for Spain in the 2006 Athens Olympics. Guizo´s son Zingaro de lyw was in the Brazilian team in the Rio Olympics 2016. Beirão is approved for breeding and is already the father of many young horses. 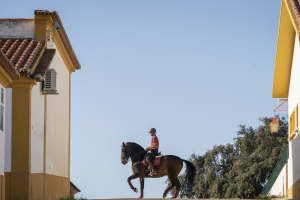 About the Alter Stud Farm

The Alter Royal stud farm dedicated to the nobility of the Lusitanian horse was founded by King D. João V  in 1748 with the aim to prepare horses for the royal riding school. The Portuguese School of Equestrian Art located in Lisbon

“May this breed be kept forever pure”, the kingdom was commanded in 1812. 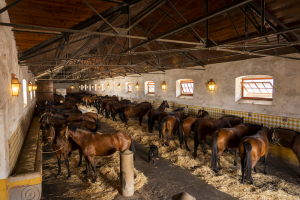 Since it was created there have been many setbacks over the years with wars and political cues threatening the stud but with foresight and determination it was preserved.  Now in modern day the farm has been revitalised, and is still successfully producing horses. 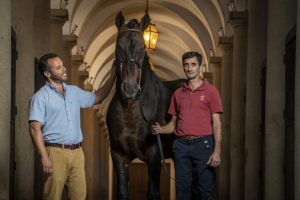 The farm Director Francisco Beja manages the day to day running of the stud especially the breeding programmes. Together with João Pedro Rodrigues of the Portuguese school of Equestrian Art they carefully select the stallions for breeding to produce horses for the Portuguese School of Equestrian Art, dressage and various other equestrian disciplines. Francisco is also the driving force behind the competition programme for the Alter horses, it is a tribute to his ambition for their success that has seen these fabulous horses, the owners and sponsors to make such significant strides in the evolution of the breed. 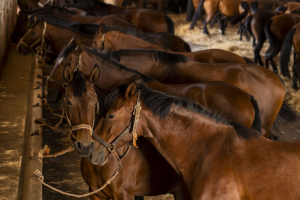 The farm is more than 800 hectares of stunning Alentejo countryside close to the Spanish Border. A landscape of gentle hills, ancient olive and cork trees, scattered with huge grey boulders that seem to have been there for ever. In the springtime wild flowers carpet the land and it is utterly stunning especially seeing the herds of mares and their foals grazing amongst the vibrant colours. Visitors are welcome at the farm they receive regular tours and there are sometimes events going on. As you go round the stud, you will find out about its history from the pictures on display in the entrance and in the museum. In the stables, admire the haughtiness of the Alter Real breed of Lusitanian horse, and learn how they become top stallions and how they are selected for the advanced riding school.

Just this year a Vila Gale hotel has opened on the farm so you can stay there to enjoy the area and the horses. 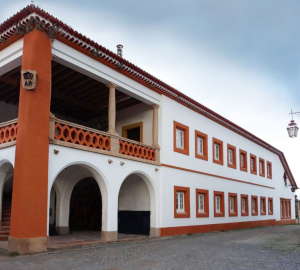 The Future is Shinning

The future is looking very bright for the young riders in Portugal with quality horses, better training, greater support and greater global interest giving them more opportunities to become serious International players. The Lusitano horse has in last few years sky rocketed in World interest attracting equestrian visitors to try and buy the horses therefore adding to the strengthening of the Portuguese economy.

Lusitanos -They truly are Modern Horses with Timeless Quality!

read about the other qualifiers  Maria Caetano on Coroado,  Rodrigo Moura Torres on Fogoso,  Joao Torrao on Equador MVl