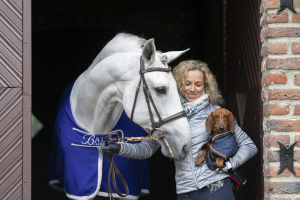 Now living in Germany, grew up on her family farm in the Alentejo where they breed Lusitanos and cattle. She is a dynamic young women that can literally ride in an International Competition or gallop across fields working the cattle.

Maria has been riding all her life she told me she has been riding since before she could walk in fact she doesn’t remember the first time she sat on a horse. Since she was a baby she has been on a horse’s back with her father. But her first profound memory was the time she rode a horse by herself in the Golegã Lusitano fair at just 5 years old.

In the early days she trained mostly with her father Paulo Caetano, who has with her mother Dita Moura Caetano been by her side throughout her career. Paulo in fact has had an outstanding career himself educating Lusitanos and riders originally for bullfighting and now dressage. He has taught several young riders to International level, including Giovana Pass who competed at only 19 years old on Lusitano Zingaro de Lyw in Rio 2016 for the Brazilian team. 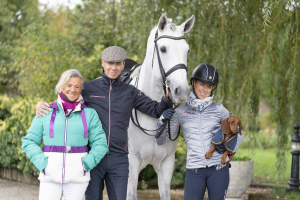 I have known Maria for several years and from the first day I met her I was struck by her friendliness, commitment and unstoppable determination. She´s highly professional in her approach to life seemingly effortlessly balancing her emotional and physical world really well. Although very modest she is extremely focussed on her career strategy and love of horses. Currently in her stable she has 5 top horses owned by sponsors, all are Lusitanos and cross bred Lusitanos. Preferring to be a totally ´hands on´ rider, she likes to do as much as possible with her horses. She told me she thinks the more time you can spend with them – riding, lunging, grooming hand grazing the better your bond is which is vital for competition partnerships. 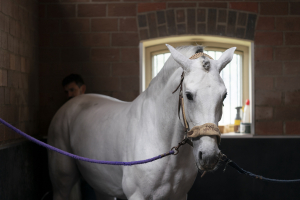 Maria’s move to Germany, although difficult being away from her home and family, has been a really successful decision, placing her much closer to the big competitions and the opportunity to be with many of the best dressage riders in the World. She also started training with the renowned Ton De Ridder which is fine tuning her riding and competition skills.

The Lusitano Stallion, Coroado she qualified on was bred by the Alter Stud Farm and is the son of Rubi AR. The Alter stallion ridden by Goncalo Carvalho in London 2012 Olympics, the pair achieved 16th place in the individuals with 74% GP, 77.6% freestyle. Maria told me that Coroado is a special stallion with a playful spirit and a great heart like his father, he can be quite electric at times and sometimes quite stallion. To manage this when going to competitions she is very careful to ensure she takes the time to secure a good calm stable location for him. She understands very well his needs and knows exactly how he is as soon as she arrives at the stable. This understanding and confidence in each other has developed a connection between them, creating is a star performance in the arena. 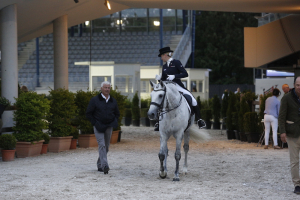 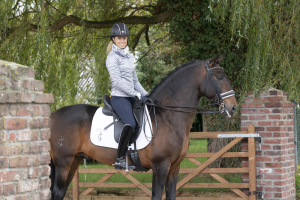 She went onto to tell me she feels very blessed to have a super supportive, professional team around her right down to her dog Alfonso – who loves to sit upon Coroado´s back. It is very exciting to watch Maria´s career grow in leaps and bounds.

Like Coroado is by Rubi AR. Fenix has started competed Big Tour scoring 68,8% and 72,6% at his second outing he is showing huge promise for the future.

Hit Plus (cross bred Lusitano) owned by Rui Oliveira Oliveira and bred by Dressage Plus debuted in Small Tour this March scoring an excellent 69%. Another horse to watch for the future. 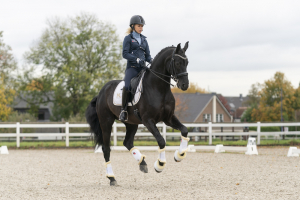 Maria on Hit Plus owned by Rui Oliveira

Text by Teresa Burton and Images by Sandra Reitenbach

Keep up to date with the World Dressage Rankings at FEI

Read about the other three team qualifiers – 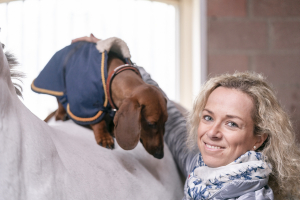