Could Working Equitation be an Olympic Sport!

You are here: Home1 / Articles2 / Portuguese Equestrian Heritage3 / Could Working Equitation be an Olympic Sport!

Partnership, timing, precision and speed are vital elements to an exciting sport which is currently making waves in the equestrian world – It’s Working Equitation!

A Sport for any Rider

A multi functional discipline where horse and rider are required to perform together through a series of trails. Since it’s all about a quality horse/rider partnership and is so accessible and fun, it’s no surprise WE (Working Equitation) is rapidly gaining in popularity around the world.

WE made its first appearance as an International competition at the Italian European Championships in 1996. The thinking behind the discipline was to develop a sport that preserved Europe’s rural traditional equitation skills. The type of riding that in days past was vital in the fields where the horse was an invaluable working partner. Although the sport has European origins it’s now gaining in popularity outside Europe especially in the USA and Australia. It’s a sport that can be enjoyed by people of all ages and riding levels.

The Competition is in  3 or 4 Parts

In WE competition there are three individual trials to accomplish. Dressage, Ease of Handling and Speed whereas in the team competitions a fourth trial is added, cattle penning. Also, at the higher levels all four trials are ridden one handed, most commonly the left hand leaving the right hand free to handle the garrocha or open a gate.

The Dressage trail is in a 40 by 20 metre arena and judged as an ordinary dressage test. Even though trot is seen at most levels, the emphasis is on walk and canter – considered in WE as the working gaits. The aim of the dressage test is to show harmony between horse and rider.

In the Ease of Handling Trial, also referred to as Manageability or Technique, the horse and rider tackle obstacles that resemble things or situations that might be encountered in the fields, such as opening and closing a gate, walking over a bridge, take a small jump or tackle situations that requires rein-back, lateral work and canter changes. Each obstacle is judged on a scale from 0 to 10 and the aim is to overcome the obstacles confidently, cleanly and precisely. The Speed Trial is ridden over the same obstacles but is not judged, instead it’s a thrilling race against the clock testing the rider’s coordination and ability to anticipate, along with the attention, speed and skills of the horse.

The Cattle Penning Trial is always performed by teams of three or four. One team member is responsible for separating a cow from a herd and, with the help from the other team members, herd it into a marked area.

“We consider it is a very complete sport. To do well in dressage, ease of handling, speed and cattle penning requires a well-trained horse and quality teamwork between horse and rider.”

“WE is also proving to be a popular audience sport, in which was very evident at the 2016 European Championship held at the Pferd International fair in Germany where the trials attracted greater audiences than some of the other sports.” 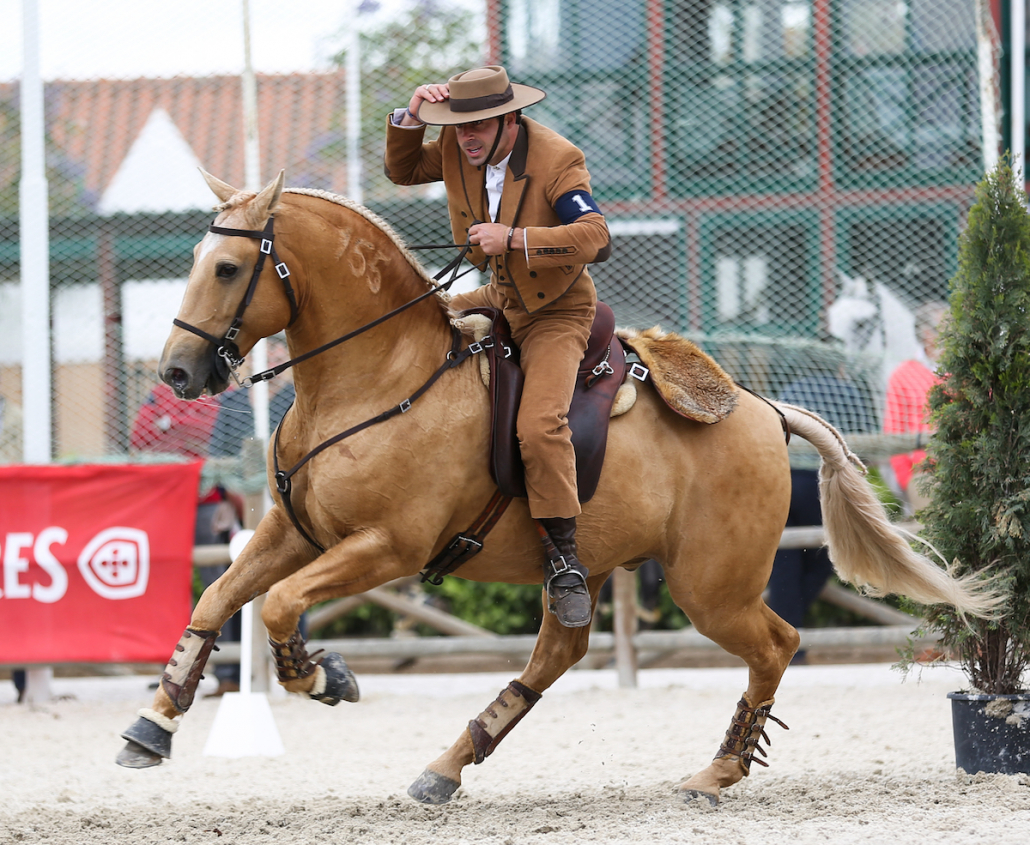 Working Equitation is an activity everyone can enjoy.

To train or compete in WE you don’t need to be specific type of rider or at a certain level. Even if you have no desire to compete the WE obstacles can be used to add variety your everyday riding. No matter what the level, horses normally love it and the obstacles will help you test the quality of your training. You will learn movements that translate in many other riding activities. As the main aim of WE is to show a functional horse and to demonstrate a good relationship between horse and rider.

There is no need for a special horse breed either  although Lusitanos are demonstrating a natural aptitude, all kinds of breeds are seen competing even ponies. A good temperament together with attentiveness are the characteristics valued over gaits in a WE horse.

The precision required really puts the partnership and understanding between the horse and rider to the test. In all obstacles – opening and closing a gate, slalom with changes in every third stride or circles around barrels – you will have to plan your way carefully and stick to that plan in order to maintain the rhythm whilst achieving the obstacle. The centimetre precision needed makes it hard, really hard but it’s a great deal of fun.

João tells us that 19 countries now have their own national official WE organisation and that many more nations are working towards achieving their own official organisation. He went on to tell me that the existing national organisations are becoming more organised which he says, is important as this supports the growth of the sport.

This in turn strengthens their case for their application to have WE become recognised by FEI.

“Working Equitation is a great sport, especially for its variety, the trials truly test the versatility of horse and rider, we consider it is a very complete sport. To do well in dressage, ease of handling, speed and cattle penning requires a well trained horse and quality teamwork between horse and rider, Another great thing is that the sport on national level attracts many riders that otherwise might not compete.

WE is not only about preserving a traditional style of riding but also the tack and clothing traditionally used.

This gives international competitions a ethnographic and cultural aspect as each country the riders are dressed in their own traditional costumes and using their own traditional tack. WE is also proving to be a very popular audience sport, this was very evident at the 2016 European Championship held at the Pferd International fair in Germany where the trials attracted greater audiences than some of the other sports. With good horsemanship as the strong underlying principle we are very focussed on the welfare of the horses, therefore just like other professional sports WAWE ensure a vet is always present at the paddock.”

Hopefully Working Equitation will continue to grow as there’s no doubt it’s a wonderful activity many riders around the globe can excel in. What’s more, it’s exciting for horses, riders and the audience.

Looking for a Working Equitation Lusitano?  Check our selection of horses HERE

To learn more about Working Equitation you can contact http://www.wawe-official.com