The large picturesque Stud is located well into the Alentejo close to the Spanish Boarder. From Lisbon about 2-2.5 hours.  On arrival we are warmly greeted by Pedro and whisked to his house for coffee and biscuits before starting the planned day of photographs and videos. It’s hot and dry with a slight breeze Pedro’s house is situated on the top of a small hill over looking the farm facilities and wide open Alentejo views in all directions. You can see for miles.

Pedro Ferraz da Costa is a charming, traditional and yet thoroughly modern business man with several different companies.  He travels extensively when talking with him you are quickly aware of his sharp mind and interest in new things.  He loves Lusitano horses so in 1987 he  started his stud with the objective of breeding horses that demonstrated good functionality for bull fighting, traditional equitation and dressage competition.

We finish our coffee and are ready to get started, the first plan is to visit the mares and foals which are enjoying life roaming the Alentejo countryside.  We all bundle into a slightly hilarious tiny vehicle along with two dogs and two huge camera bags. I think of cartoons for sure anyone watching us must have thought the same –  three of us in the front legs hanging out the sides. Nevertheless we make it to the fillies one to three years old. 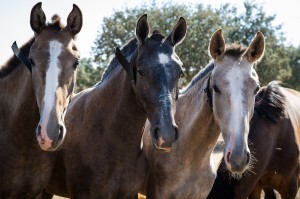 Pedro’s horses are solid well put together animals that have good size, many with sportive conformations and good temperaments. The fillies are curious and quickly we are surrounded noses in our bags and pulling our clothing.  They are all wearing large wide plastic collars because the stud is participating in a modern trial looking at eating behaviour and the associated horse growth and development.  He is doing this with the university with selected colts and fillies the trails ends at end of 2014. In their fields there are large metal feeding units that provide small quantities of hard feed when a horse goes into the feeding bay. The feeding bays are very small only allowing one horse in at a time and the quantity of feed strictly measured. However each animal can return as many times as they like.  But not all horses can feed at the same time as there are limited feeding bays about 2 or 3 per group. The digital reader in the collars gathers the information.  All the fillies are extremely healthy and well rounded. When we arrived they were all hanging around the feeders or under the trees.  There are fillies in another field nearby that are not on the trail they appear to look just as well. 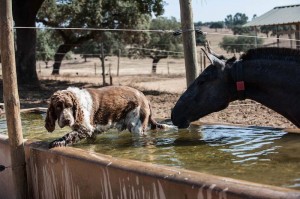 Pedro’s dog manages to greatly amuse us all by climbing to the drinking trough and looks very upset by a filly taking interest – the comedy continues.

Back into our cartoon mobile and onto the colts which like the fillies are in two separate groups – one group is on the feeding trail, they too are hanging around the feeders.  I did wonder to myself if  that is a problem do they rarely leave these feeders. Talking with Pedro he seemed interested to see the conclusions but not convinced they were of any real benefit. The colts are more cool than the fillies preferring to study us from a distance, until the first one breaks the cool stance curiousity getting the better of him. Then the other tentatively follow suit.

In the second field where the feeding trail is not in action the colts are much more eager the get to know us and after spending sometime with them they follow Pedro back to the gate. There is a difference here with weight compared to the other group. However is may be nothing to do with the feeding trails as the second group was a much smaller herd and only one and two year old colts the three years were away to start work. Two year olds often look out of proportion and thinner.

Pedro does not just breed pure bred Lusitanos he is also beginning to produce crossbreds using two Oldenburg mares. This is a trend developing among several breeders in Portugal and the Massa Stud in France have been doing many years. There are some interesting young crossbred horses in his fields. Pedro is using Warmblood mares and Lusitano stallions.

After visiting the mares which are good strong quality animals we make our way back to the main facility which is made of a large stable block probably 25 – 30 stables in total. A cool arched preparation area, an indoor and outdoor arena and a large breeding building and a bull ring.

We watch a few examples of his horses being worked and ridden.  Pedro generally starts his 3 year olds at the farm and then he sends his best colts out to professional trainers to be produced for competition, competed and selling.  Miguel Ralao usually has several of his youngsters in training.  We look at an eye catching big black cross bred colt that is due to be shown at Golega and then go to Miguel (see in photograph above).  There are high hopes for this colt’s future. I was struck by the colt’s great temperament and how easy he was to be around especially considering what a very short time it was since he had come from the fields.  Some of the other three years olds were more nervous at this big new life. It takes a while to a just. 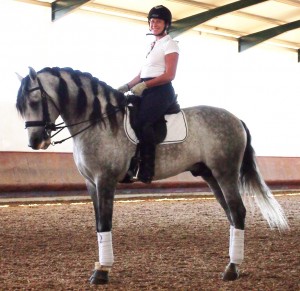 I came into contact with Lusitano Horse Finder through a friend, who had bought a horse from Portugal the previous year. Teresa was very efficient in setting up meetings to look at horses which suited my “wishlist”, and showed great patience in accompanying me on the visits.  Not to mention her tour guide services as we drove around in south Portugal! It was very reassuring to have someone along to discuss the horses with, and not least, to take films for me.

When I eventually found my lovely Coral (Pedro Ferraz da Costa brand), who ticked all the boxes, she put me in touch with a local vet, and assisted both in the negotiation process with the seller, and in getting paperwork sorted out.

I have no hesitation in recommending her services to others, and would gladly use LHF again. Eileen Norway

Since the stud started Pedro has used stallions from bullfighting lines such as OPUS 72 (Veiga Brand), Coral (Núncio brand) and JOCOSO a son of CORAL bred at his stud. On occasions ESQUIVO (Arsénio Cordeiro).  The last three stallions are descendants of SULTÃO (Veiga brand) – João Núncio’s famous horse.

Stallions from bullfighting lines such as OPUS 72 (Veiga brand), CORAL (Núncio brand) and JOCOSO, son of CORAL who was born at the stud, in addition to ESQUIVO (Arsénio Cordeiro brand) have been used. The latter three horses are descendants of SULTÃO (Veiga brand) – João Núncio’s famous horse.

Also used has been ORPHÉE (Roger Bouzin brand), our breed’s first representative in dressage competition at the Olympic Games, in addition to XAQUIRO (Quina brand) a stallion who reached fame for his descendants’ sport characteristics and TALISCO, the most highly classified Lusitano horse to-date in the World Championship for Young Dressage Horses.

The stud has about 100 horses and is well known and highly appreciated for quality and producing horses with super characters suitable for sport.

If you would like the arrange a stud visit do get in touch we will be happy to assist.  If you are coming from Lisbon you need to allow a whole day to really enjoy all. 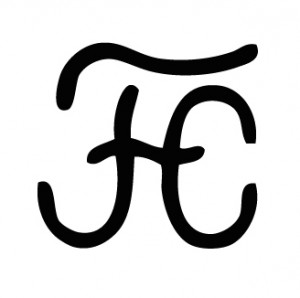 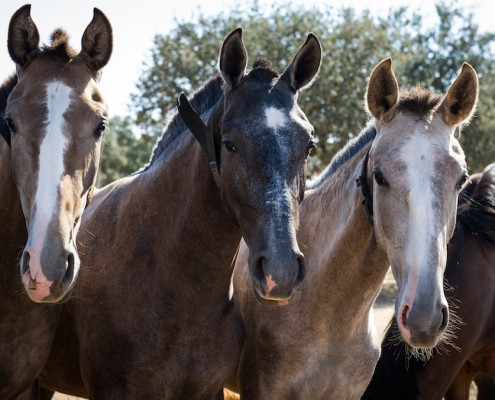 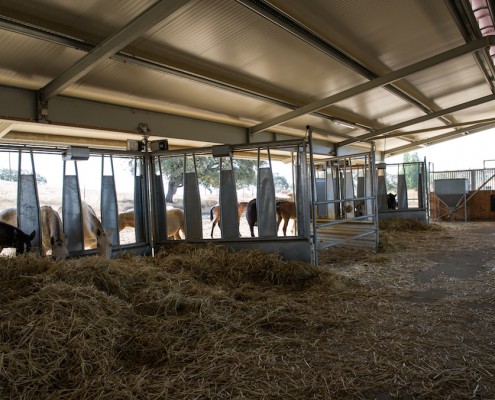 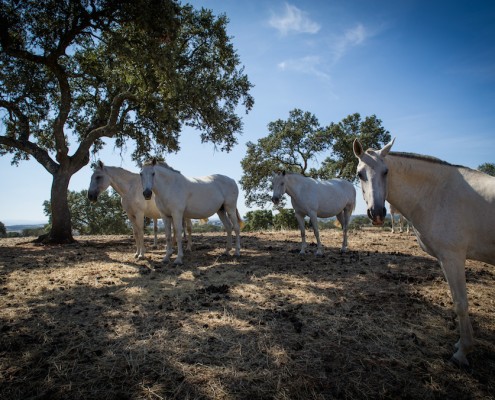 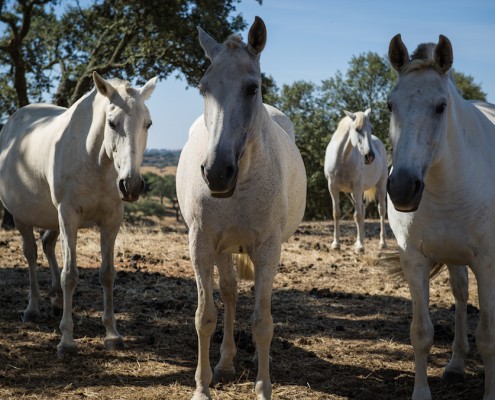 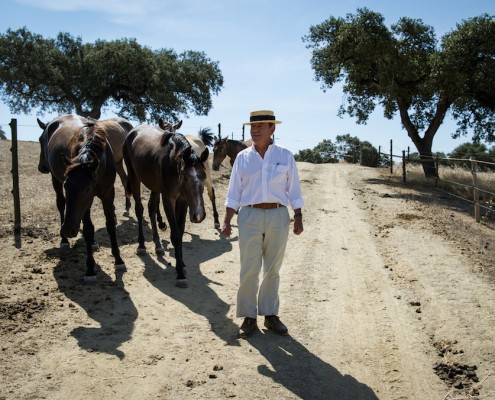 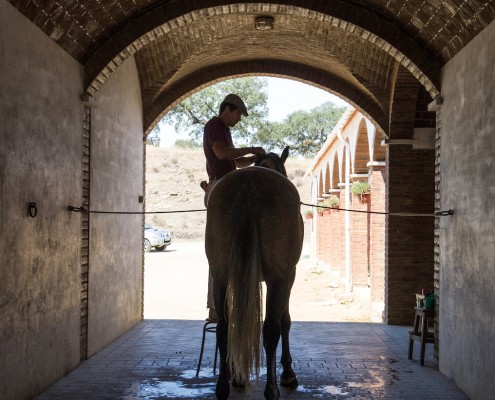 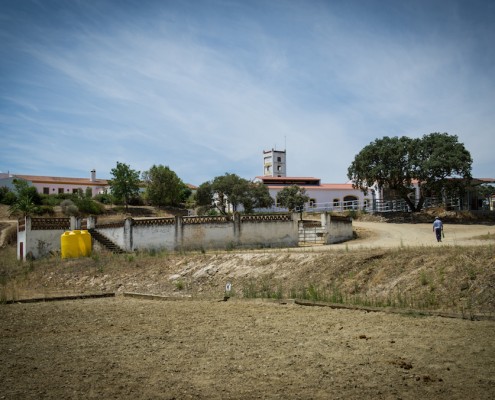 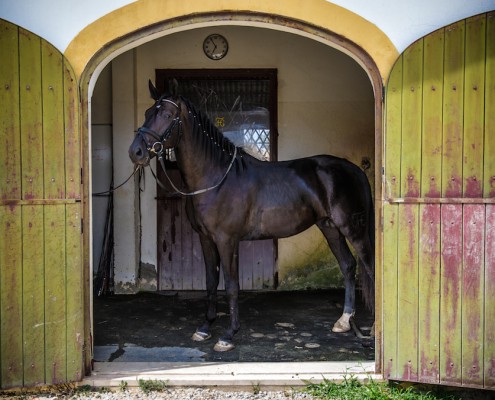 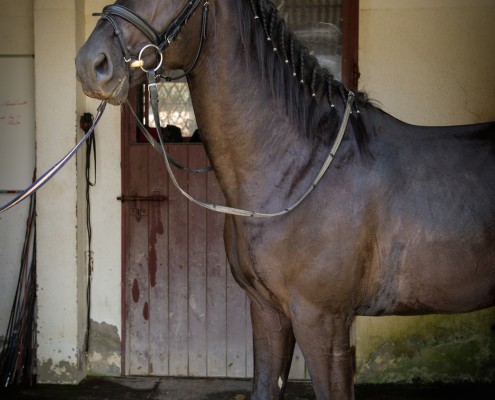 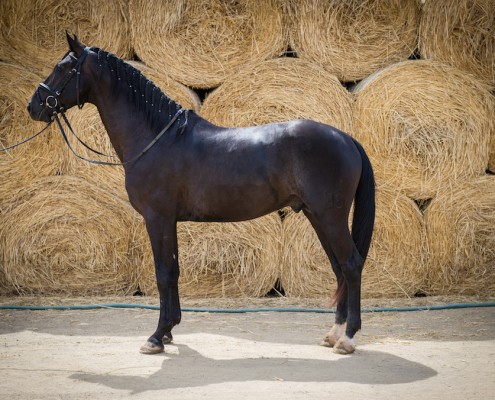 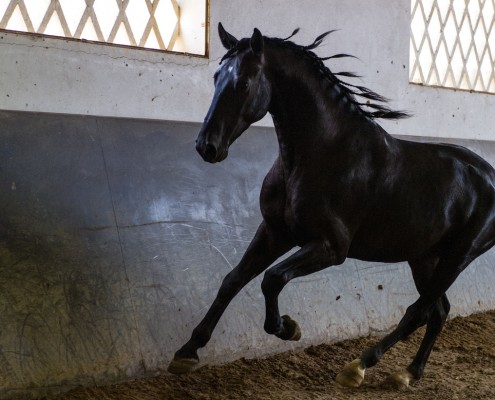