Classical dressage is the oldest style of classical riding

Evolved from early training of cavalry movements for the battlefield, and has since developed into competitive dressage, we see today.

Classical riding, is the art of riding in harmony, balance and lightness with the horse.
Classical riding is when the rider has a good seat, correct and well-balanced position, gives the aids correctly and at the correct time and moves with the horses movement.
The origins of this form of riding, began with the natural ability of the horse, seen in the wild.

Modern dressage, states that the horse should perform under saddle, with the athleticism and grace that it naturally shows when free.
Horses naturally use collection in the wild, when they are playing and fighting. If they are trying to intimidate or impress another horse, they make themselves look bigger, like any other animal. To do this, they lift the forehand, raise the neck and to make it look bigger, flex the poll. At the same time, they create more upwards movement, transforming their gaits. When fighting, the horse will collect, to quicken their reactions for more threatening behaviour such as kicking, rearing and bucking.

All Breeds of Horse and Pony can Benefit

Regardless of breed, all horses have the natural ability to collect, this probably inspired early trainers to train this behaviour, in a more controlled manner. This also confirms the reason, that Classical dressage trainers, say that every healthy horse, regardless of its breed, can perform classical dressage movements, including the ‘airs above the ground’, even though it may perform them differently, due to its type and build.

The main goal of dressage training, is to develop a horse to its highest ability, to perform as an athlete. Creating maximum performance with a minimum of effort.

The German training scale, is to physically develop the horse, in a consistent way with longevity in mind. Dressage is fitness training and needs to be treated with patience and compassion.

Xenophon, emphasized training the horse through kindness and reward. His work is the earliest,most surviving work, on many of the principles of classical dressage, called Classical dressage is the oldest style of classical riding,.
In the 15th century, forceful and brutal training, became less favoured, while the ‘art of riding’ became more and more popular. With these methods and uses, indoor riding became more useful.

This era gave rise to a new and more enlightened approach to riding, as a part of the general formation of the classical arts. By the Victorian era, indoor riding had become a sophisticated art, with both horse and rider spending many years, to perfect their training. In this period, certain riding masters wrote pieces on technique and theory, such as Eisenberg, Andrade, Gueriniere and Marialva.

The horses were trained to perform certain movements of ‘airs above the ground’, which could enable their riders to fight more easily in battle. These included movements such as Levade, capriole, Courbette, and Ballotade. Movements still seen today, in competitive dressage include the Piaffe, Passage and half-pass.

The “high school” or ‘Haute Ecole’ movements, known as the “airs above the ground,” include the Courbette, Levade, Capriole and Ballotade. It is thought that it is unlikely these movements were actually used in actual battle, as all but the Capriole expose the horse’s underbelly. It is more likely they were only trained and used off the battlefield.

In the capriole the horse leaps into the air, with its forelegs in towards its chest at the height of elevation, while kicking out with his hind legs.

The levade is a movement where the horse is balanced on its haunches at a 45 degree angle from the ground. It requires great control and balance, and is very difficult.

The Iberian breeds are the main breeds that are most well known for their abilities for airs above ground in particular the Andalusian, Lusitano and Lipizzaner.

There are also many independent classical dressage trainers who endeavour to keep this branch of the art alive, including the students of the late and one of the most iconic, world renowned modern classical masters Portuguese rider Mestre Nuno Oliveira. 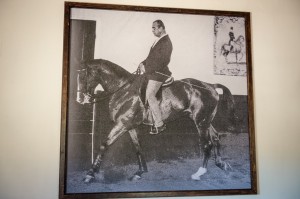 Nuno de Oliveira was born June 23rd, 1925 and died in a hotel room in Australia on February 2nd, 1989, aged 64. He was one of the emblematic people of Portuguese equestrian culture, with a unique personality. Fond of classical music, he would always listen to Verdi music while he rode, the music could be heard all around the valley where he lived and right to the next village.

He was Internationally known, as the last Grand Master of the art Classical Riding. Embodied the passing era in which the academic and artistic riding of De la Gueriére eque in the twentieth century reached its peak with François Baucher, of whom he was a great admirer.

Mestre Oliveira traveled around the world beginning in Switzerland, by the patron Auguste Baumeister, riding the horse Euclides. After that, he went to many other places, such as the Riding Schools of Europe, Cadre Noir and Vienna in Austria, where he left a large number of students loyal to his teachings.

His worldwide travels took him to Countries such as USA, Canada, Australia, Thailand, Peru, CostaRica, The Philippines and many others.
Through his talent, self-discipline and true love for horses, this great Portuguese Master reached his ultimate ambition.
Master Nuno enforced and supported his way of teaching, which was based on riding and practising lightness, harmony, beauty and freedom. He said, “The horseman who constantly holds his horse with a strong touch can never improve; only the horseman who knows how to work his horse free, will discover the art of riding.”

In 1973, he bought a small place near Malveira, called Quinta do Brejo, where he lived until his death and set up his business in which hundreds of students, worldwide have ridden.

This establishment has been and continues to be a school of teaching sensitivity to riders. A school of development of equestrian skill, and respect for the horse.